The Shmoo first appeared in the strip in August 1948. According to Shmoo legend, the lovable creature laid eggs, gave milk and died of sheer esctasy when looked at with hunger. The Shmoo loved to be eaten and tasted like any food desired. Anything that delighted people delighted a Shmoo. Fry a Shmoo and it came out chicken. Broil it and it came out steak. Shmoo eyes made terrific suspender buttons. The hide of the Shmoo if cut thin made fine leather and if cut thick made the best lumber. Shmoo whiskers made splendid toothpicks. The Shmoo satisfied all the world’s wants. You could never run out of Shmoon (plural of Shmoo) because they multiplied at such an incredible rate. The Shmoo believed that the only way to happiness was to bring happiness to others. Li’l Abner discovered Shmoos when he ventured into the forbidden Valley of the Shmoon, against the frantic protestations of Ol’ Man Mose. “Shmoos,” he warned, “is the greatest menace to hoomanity th’ world has evah known.” “Thass becuz they is so bad, huh?” asked Li’l Abner. “No, stupid,” answered Mose, hurling one of life’s profoundest paradoxes at Li’l Abner. “It’s because they’re so good!”

Ironically, the lovable and selfless Shmoos ultimately brought misery to humankind because people with a limitless supply of self-sacrificing Shmoos stopped working and society broke down. Seen at first as a boon to humankind, they were ultimately hunted down and exterminated to preserve the status quo. (Thought extinct after the 1948 adventure, one Shmoo always seemed to escape to Dogpatch’s Valley of the Shmoon to form a new colony and a later plot revival by Capp). Licensed Shmoo merchandise became a huge phenomenon in the late ’40s and early ’50s, spawning a wide variety of dolls, toys, glasses, wallpaper, belts, books, jewelry, balloons, clocks, ashtrays, cannisters, salt & pepper shakers, dairy products, banks, belts and ear muffs. There was even an official Shmoo fishing lure! These are all highly collectible items today. 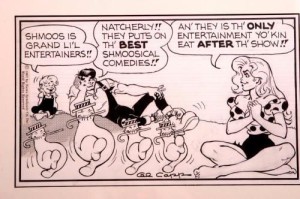