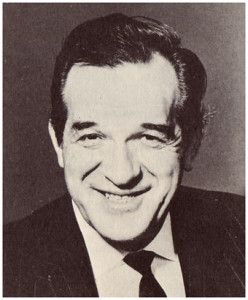 Cartoonist Al Capp (1909-1979) created “Li’l Abner,” regarded by many as the greatest comic strip of all time. He was born Alfred Gerald Caplin in New Haven, CT. At the age of nine he lost his left leg in a trolley accident. Encouraged by an artistic father, young Alfred developed his own cartooning skills. At 19, he became the youngest syndicated cartoonist in America, drawing “Colonel Gilfeather,” a daily panel for Associated Press. But, bored with the staid and formulaic Gilfeather, Capp left AP and soon was ghosting the popular boxing strip “Joe Palooka” for Ham Fisher. But Capp found the working conditions in Fisher’s studio intolerable.

In 1934 Capp struck out on his own. He took his hillbilly idea to United Features Syndicate (creating a lifelong public feud with Fisher) and “Li’l Abner was born. Abner was carried at first by only eight newspapers, but his hapless Dogpatchers hit a nerve in Depression-era America. Within three short years it climbed to 253 newspapers, reaching over 15,000,000 readers. Before long he was in hundreds more, with a circulation exceeding 60,000,000. At a time when syndicates owned the copyrights, trademarks and merchandise rights to comic strips, Capp wrested control of “Li’l Abner” from United Features, an almost unprecedented event.

Besides entertaining millions, Capp permanently affected the popular culture. In 1937 he introduced the annual Sadie Hawkins Day race into his strip. It quickly inspired real life girl-asks-boy dances across America and Sadie Hawkins Day became a national institution. In 1948 his lovable Shmoo characters became a national sensation, creating the largest mass merchandising phenomenon of its era, followed on its heels by the Kigmy. After nearly 20 years of prominent bachelorhood, Li’l Abner finally married Daisy Mae in 1952, an event that shocked the country and made front page news.

Capp’s celebrity admirers ranged from actor/director Charlie Chaplin, writer John Updike and economist John Kenneth Galbraith. Author John Steinbeck was not only a fan, in fact, he called Capp “the best writer in the world.” Capp speckled his wild narratives with unforgettable characters – among them heartless capitalist General Bullmoose; human jinx Joe Bfstplk, who was followed by his own bleak rain cloud; Evil Eye Fleegle whose double whammies could melt skyscrapers; cave-dwelling buddies Lonesome Polecat and Hairless Joe who concocted Kickapoo Joy Juice, the ultimate moonshine; Mammy Yokum, the sweet old lady who could outbox men twice her size; fumbling detective Fearless Fosdick, whose bullet-riddled body resembled Swiss cheese; and the gorgeous but odorous Moonbeam McSwine who preferred the company of pigs to men. And when readers thought there was no sadder and poorer place than Dogpatch, Capp would take his readers to frostbitten and poverty stricken Lower Slobovia. It is no surprise that the colorful Li’l Abner cast inspired a long-running Broadway musical in 1957 and two film adaptations.

In addition to the enormous popularity of his comic strip, Capp’s fame stemmed from a high media profile. He was a frequent and outspoken guest on the “Tonight” show, spanning hosts Jack Paar, Steve Allen and Johnny Carson. He authored his own newspaper column and radio show and was a guest lecturer at campuses nationwide. Capp retired the strip in 1977 and died two years later. Capp’s “Li’l Abner” stands the test of time as a pinnacle of cartoon art and social satire.

A great example of Al Capp’s humor and creativity.

(1) THE SHLEMEEL- IS THE WAITER WHO IS SPILLING THE HOT SOUP ON THE CUSTOMER. THE SHLEMEEL ISN’T A BAD GUY_ _ _ HE DOESN’T MEAN TO DO ANYTHING BAD_ _ _HE’S SIMPLY INCAPABLE OF DOING ANYTHING GOOD. LOOK HOW REGREFUL HE IS THAT THE SHLEMOZZEL (2) IS BEING BOILED ALIVE.

(2) THE SHLEMOZZEL— DOESN’T HAVE TO DO ANYTHING TO CAUSE A DISASTER _ _ _ ALL HE HAS TO DO IS BE SOMEPLACE_ _ _ AND THE DISASTER FINDS HIM.

(3) THE SHNOOK– IS THE FELLA WHO IS SURPRISED TO SEE THIS HORRIBLE THING HAPPENING_ _ _BUT WHO IS DELIGHTED BECAUSE IT ISN’T HAPPENING TO HIM. HE’S THE GUY WHO TOSSED THE WET CIGAR BUTT ON THE FLOOR THAT THE SHLEMEEL (1) IS SLIPPING ON. A SHNOOK DOESN’T DO MEAN THINGS DELIBERATELY. IT’S SIMPLY THAT EVERYTHING HE DOES TURNS OUT TO BE MEAN_ _ _ AND HE ISN’T SORRY.

(4) THE SHTOONK – IS THE ONE WHO IS LAUGHING AT THE POOR SHLEMOZZEL (2). A SHTOONK ENJOYS MISERY BUT HE’S TOO YELLOW TO CAUSE IT HIMSELF.

(5) THE SHNORRER – IS A CHAP WHO NEVER MISSES AN OPPORTUNITY _ _ _ EXCEPT AN OPPORTUNITY TO SPEND HIS OWN MONEY. HE’S TELLING THE WAITER TO QUICKLY PUT HIS DINNER ON THE SHTOONK’S (4) CHECK BECAUSE HE FEELS THAT ALL THIS HORROR IS MAKING THE SHTOONK (4) FEEL SO GOOD HE WON’T NOTICE THAT HE IS PAYING DOUBLE.

(6) AND (7) THE SHLOOMPS AND SHLEPPERS – THE SHLOOMP (6) IS VERY MUCH LIKE THE SHLEPPER (7) _ _ _ EXCEPT THAT HE IS NOT SO HOPEFUL. THE ONE THING A SHLOOMP AND A SHLEPPER HAVE IN COMMON IS THAT NEITHER OF THEM CAN DO ANYTHING. THE SHLEPPER (7) IS ARISING FROM HIS TABLE IN A SORT OF DAZED EFFORT TO DO SOMETHING _ _ _ AND NO MATTER WHAT HE DOES _ _ _ IT WILL MAKE MATTERS WORSE _ _ _ BUT THESHLOOMP (6) IS SMART ENOUGH TO REALIZE THAT HE’S TOO STUPID TO DO ANYTHING_ _ _ AND SO HE JUST SITS THERE.