Happy New Y’ar everyone! Here we present to you a round-up of all the amazing performances of Li’l Abner, the musical, in 2019! If you have more for us to post on our site, email us at : cappenterprises@lil-abner.com.

Li’l Abner at the Orlando Rep!

“A fun-filled, foot-stompin’ musical taken directly from the comics, LI’L ABNER is laced with gentle and knowing satire, rib-tickling gags, and a host of brash, catchy tunes.  World-famous characters populate this upbeat show in a delightful mixture of hillbilly nonsense and sharp, critical humor. A Broadway hit in 1956, the show won two Tony Awards and celebrates the denizens of Dogpatch USA and their customs, such as the not-to-be-missed Sadie Hawkins Day Race.”

Li’l Abner by the Kinkaid Regional Theatre at the Pendleton County Fairgrounds, Kentucky!

“New to KRT’s production, each actor will play a musical instrument at some point during the performance; all while accompanied by a four piece on-stage band. The actors take this new performance element a step further, pretending to fish and hunt with guitars and other instruments while singing the day away. Set in the fictional rural Appalachian town of Dogpatch U.S.A., the characters begin the show just as they would any other day. They go about their business washing clothes, fishing, and strumming their guitars when their peace is interrupted with the news that the United States government has deemed Dogpatch an “unnecessary town” that will soon be used to test the military’s new bomb. This news quickly has the town reeling as the residents don’t want to leave their homes and see their town destroyed. It’s then up to local hero, the young and handsome Abner Yokum, and friends to find something “necessary” about Dogpatch and save their town. Little does he know that answer might lay in the Yokumberry tree planted in his own backyard, the same berry that gave him great strength and height. This tree might be Dogpatch’s only chance to be saved. Find out if these underdogs can get this berry to Washington D.C. and save their town!
KRT identified with the challenge faced by the residents of Dogpatch. Just as the characters work to deem Dogpatch a “necessary” town, KRT works to give their rural Falmouth the very best theatre it can provide and make attending a show here “worth the drive.” KRT invites all to attend a performance this summer.”

Bob Frame has wanted to be part of another production of “Li’l Abner” for almost 50 years.

Frame, who heads the theater department at Cayuga Community College, is directing the Auburn Players Community Theatre’s production of the musical based on Al Capp’s long-running comic strip this weekend at the college. One reason Frame has waited so long to do the show again after performing it in middle school, he said, is the difficulty of finding suitable actors for the title role.

But in Shane Heidecker, a performer in the Merry-Go-Round Youth Theatre program, Frame found the “strong, good lookin’ guy who can sing” to be his Abner.

With book by Norman Panama and Melvin Frank, music by Gene De Paul and lyrics by Johnny Mercer, the musical takes place in the strip’s hillbilly-spoofing setting of Dogpatch. Daisy Mae (Jessica Alexander) tries to catch Abner’s eye, but he’d rather catch fish — until Dogpatch is selected to become a nuclear test site. The town’s quest to prove it’s worth saving leads Abner, and the tonic that gives him strength, to Washington. But General Bullmoose (Kristina Abbott) plots to steal the formula, while wrestler Earthquake McGoon (McCuin Gould) plots to steal Daisy Mae’s hand in marriage.

Though based on a humble comic strip, the musical is big, Frame said. He directs more than 40 performers on stage, who sing and dance in front of scenery made by Syracuse designer Navroz Dabu, and under lighting designed by Michael Broughton, formerly of the Finger Lakes Musical Theatre Festival. Their colorful costumes, meanwhile, come with plenty of patches, to be sure.

“The world they’ve created for the actors to live in has been so wonderful,” Frame said.

Though the show’s secondary plots involve Republicans and Democrats who hate each other, as well as capitalists trying to seize control of a product, “Li’l Abner” doesn’t point its finger in any particular directions, Frame said. And its characters are broad sketches, he continued, so not knowing anything about the comic strip won’t stop audiences from having a good time.

“It’s the old-style musical where you walk in, you sit down, you toe-tap and you enjoy the story happening in front of you,” he said. “And you come out feeling good.” 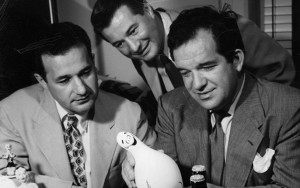 Al Capp (right) cradles a shmoo doll as he shows his brothers Elliot (left) and Jerry “Bence” some of the mountain of merchandise from his comic strip “Li’l Abner” in 1950. Credit: Journal Sentinel files

Article by Chris Foran of the Journal Sentinel:

It’s hard to overstate how big a deal in pop culture “Li’l Abner” was in its day.

At its peak, the comic strip by Al Capp was published in more than 900 newspapers in North America, with more than 70 million readers. The strip sparked merchandising juggernauts, TV shows, movies, a Tony-winning Broadway musical and even a theme park.

It also made Capp a cultural figure in his own right — at least until his personal behavior led to a downfall.

As Michael Schumacher and Denis Kitchen relate in their terrific biography “Al Capp: A Life to the Contrary,” Capp was working as an assistant on the comic strip “Joe Palooka” in 1933 when he introduced a backwoods brawler named Big Leviticus — a character who became the basis for some of his creations in “Li’l Abner.”

Set in the rural enclave of Dogpatch, Ky., “Li’l Abner” centered on the world swirling around the title character, an oafish, clueless soul with big ideas and a bigger physique.

Capp used Dogpatch as a cornpone canvas, first as broad satire but eventually as creative commentary on the American scene, lampooning everything from rival comic strips to pop stars.

In addition to Li’l Abner, there was his persistent suitor, Daisy Mae (think Daisy Duke before there was a Daisy Duke); Mammy and Pappy Yokum, Abner’s parents; and a slew of supporting characters, including Joe Btfsplk, a jinxed guy with a black cloud over his head, and Sadie Hawkins, a girl so homely her father staged a footrace in which the unmarried women of Dogpatch pursued the hamlet’s bachelors. (The high school dance in which girls ask the guys was inspired by Capp’s creation.)

The strip began in six newspapers on Aug. 13, 1934. The Journal jumped in early, adding it to the Green Sheet in Sept. 10 of that year.

“Li’l Abner” quickly became a cultural obsession. One character — the “shmoo,” a white blob with a cuddly disposition that could provide all sorts of foodstuffs with ease — was so popular that merchandise in its first year generated more than $25 million in sales (about $245 million in 2016 dollars). 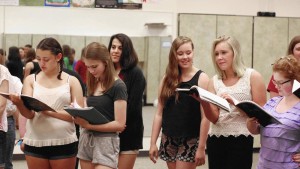 Coverage from Melanie Savage at the Hartford Courant:

Li’l Abner, this year’s AHM Summer Youth Theater production, may not be one of the better-known musicals, but it is certainly pertinent to today’s political climate.

“I can think of no play more appropriate than this show for this year,” said Director Mary Rose Meade.

The show is a political farce, based upon the Al Capp comic strip that ran in newspapers from 1934 until 1977. Written in 1956, Li’l Abner “offers a chance to laugh at human nature, both in and out of the government realm,” according to an AHM press release.

“It seems like our political situation is a runaway train,” said Meade.

Hearing what is said in the show about 1950s politics, reminds one that not much has changed in more than 60 years. 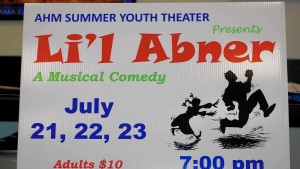 Happy Wednesday and welcome back to another edition of strip of the week! This week click below and discover some words of caution: “Beware of Scraggs Bearing Photographs!”

Welcome back Li’l Abner fans! We’ve got a fresh new strip of the week for you today; click below to check out “Which Boy?”

Your weekly dose of hilarity is here! This we have “Corsets Make the Woman!” as our strip! Click below for a high-resolution version of more Li’l Abner fun!

We’re back with anothe strip of the week! Click below to check out “Why is Salomey A-Tappin?”

We know you’ve been waiting to see what this week’s strip of the week brings, but have no fear! We’re back with “Virtue Triumphs!!” Click below to check it out!

Welcome back friends! We’ve got a fresh new strip for you today! Click below for a high-resolution version of “A Po’k Chop of a Different Color!”